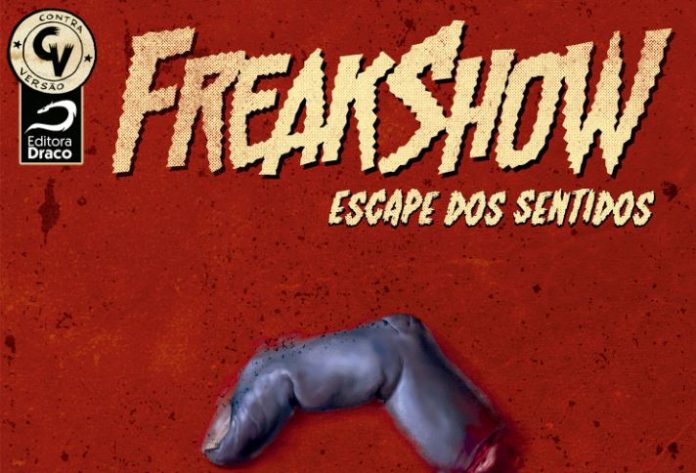 In an unprecedented joint initiative, the escape game company Escape Time, the radio program 89 Freak Show and the Publisher Draco are launching the comic book “Freakshow - Escape from the Senses”, which has the plot inspired by a horror-themed escape room.

In the story, the guitarist Mário takes the members of his band, Os Baudelaires, to play an escape room and, with that, recover their team spirit very shaken after the last rehearsal. However, what none of them imagine is that this game was developed by a psychopath, who uses people as guinea pigs for his sick experiments involving the limits of the five senses.

HQ will be launched on Comic Con Experience 2018 and can be purchased at Artists' Alley table A32-33. Afterwards, the comic will be available in the main bookstores and specialized stores, on the Publisher Draco, at Escape Time and on Radio 89 FM (directly with broadcaster Dane Taranha).

“In order for the reader to experience even more the sensations experienced by the characters, the look of the story adds to the Indian artwork a touch of real elements through photo collages, exposing the distress and disgust of the macabre challenges.”

“Our perception of reality is totally based on our senses, but what happens if we are released from these sensory limitations. It was through the villain of the story that I put all this to the test and ended up finding really distressing ways of exposing the sensory system of the characters to the test. I want to drive each of them and the most sensitive readers crazy in the process ”.

“Comics have always been present in my life. When I met Raphael came the desire to join the passion for terror with the universe of comics. Later, Escape inaugurated the Mortal Games room and we saw the opportunity to complete this project ”.

Specialized in comics and genre literature, Editora Draco has won several awards for its publications in horror, fantasy, science fiction, humor and crime. Highlight for the cosmic horror trilogy formed by The Yellow King in Comics, The Awakening of Cthulhu in Comics and Demons of Goetia in Comics.

Radio program created by Dane Taranha and Armando Saullo. Dedicated to fans of horror and the fantastic universe. Every Sunday at 9 pm on Radio 89 FM and in podcast format on the website http://radiorock.com.br

Present in São Paulo (Brooklin unit), Rio de Janeiro (Botafogo unit) and Belo Horizonte (Savassi unit), in addition to leisure activities, the Escape Time also attends various events, workshops and companies that are interested in transforming their dynamics into unique experiences. The company is also a pioneer in the game on wheels in Brazil with the TruckEscape, a fleet of trucks of different sizes and themes that meet all the needs and styles of events. They are intelligent games and extremely adaptable to places and situations. To learn more about Escape Time, visit: https://escapetime.com.br.

It's not just Batman who is turning 80 in 2019. Brazilian designer and screenwriter Julio Yoshinobu Shimamoto, better known as Shima, ...
read more
News

CCXP19 has sold out tickets for Friday (6)

CCXP19 has another day of sold out tickets. In addition to Saturday (7), the separate credentials for Friday (6) are now sold out. In...
read more