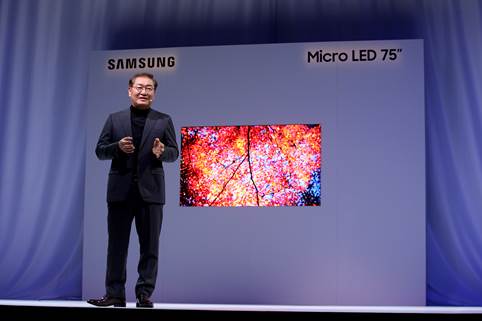 “Samsung has led the way in cutting-edge screen innovation for decades,” said Jonghee Han, President of Visual Display Business at Samsung Electronics. “Our Micro LED technology is at the forefront of the next screen revolution, offering smart and customizable panels that stand out in all performance categories. Samsung Micro LED has no limits, just infinite possibilities ”.

With cutting-edge self-emitting technology that does not use organic materials and modular capabilities, Samsung Micro LED screens offer unparalleled image quality, versatility and design. These transformative TV screens are comprised of individual self-emitting Micro LED modules, with millions of red, green and blue inorganic microscopic LED chips that emit their own light to produce brilliant colors on the screen, offering unparalleled image quality that surpasses any current technology display available on the market.

At CES last year, Samsung unveiled the Micro LED, launching The Wall, a 146-inch * Micro LED screen, which was critically acclaimed and awarded. Due to technical advances in the packaging process of ultrathin semiconductors, which narrow the gap between microscopic LED chips, Samsung was able to create an incredible 75-inch 4K Micro LED screen, a smaller and friendlier format for residential environments.

Thanks to the modular nature of Micro LED, this technology offers flexibility in the size of the screen, allowing users to customize it for any environment or space. By adding Micro LED modules, users can enlarge their screen to any size they wish. The modular functionality of the Micro LED will allow users in the future to create the best possible screen that meets their aesthetic, functional and space needs, even in irregular sizes, such as 9 × 3, 1 × 7 or 5 × 1.

Samsung's Micro LED technology also optimizes content for any screen size and format. Even with the addition of more modules, Samsung's Micro LED screens can be scaled to increase resolution - all while maintaining constant pixel density. In addition, Micro LED can be compatible with any standard 16: 9 content, 21: 9 widescreen movies, up to unconventional proportions like 32: 9 or even 1: 1, without compromising image quality.

Finally, as Micro LED screens have no frames, there are no limits between modules even when you add more. The result is an incredible fluid and uninterrupted effect that allows the screen to be elegant in any environment. The attractive design options have been further enhanced by the new features of Environment Mode.

Galaxy Fold has all units sold out in Brazil

0
Dash & Lily is a charming series that, through the challenges made by the notebook, brings us a reflection on facing our own fears and getting out of our bubble. The world can be an incredible place when we open up to it.