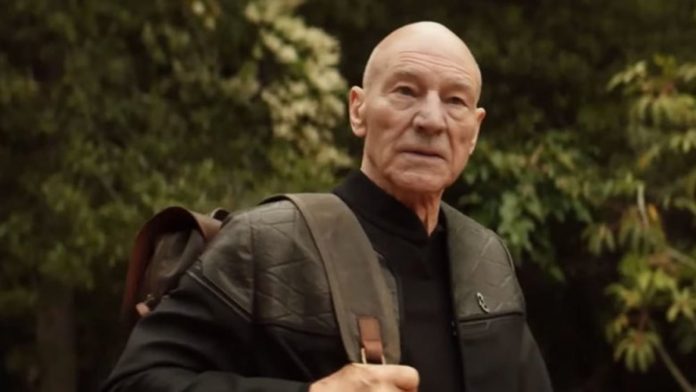 Yesterday debuted the newest series Star Trek: Picard in the USA and today she is already on Prime Vídeo in Brazilian territory.

After so many interviews and tips, really everything that has been said is on the screen. Picard is completely different from what we've seen so far. Not just in its history, which now runs away from the starship pattern or somewhere in the galaxy, focusing on the life of Jean Luc, who is also changed.

We no longer have that confident captain, with an imperative voice and a look to bring down his enemies and pass confidence. Now he is a sad, bitter person with a tired voice. He lives practically in isolation in his vineyard next to “number one” and two other characters that I will not include in order not to give spoilers.

The first episode is quick, practically an introduction to this new world that if it weren't for the future, it could very well be ours.

There are many social criticisms and mainly to the human being, where Picard says that "today people don't know the story anymore", "they make bad things be erased with a simple gesture, but in the real world this is not how it happens", among others, showing how socially the human being has become futile to the point of becoming arrogant in making sure that he can attack and make his point of view unique in any situation. It is sad to see that really in a technological world where there should be more union and information, what there are are critical and uninformed people.

And to answer the title question, yes, Star Trek is back! Mainly because Star Trek: Picard plays his part in bringing a social critique of our world to the utopian universe created by Gene Roddenberry, with more human characters and less super heroes as from the last films or a single character that is practically the center of a series, as in the case of Discovery. In addition to those who have never seen anything about Star Trek, being able to check and understand all its plot, and again without having to play "in the face", that a universal translator works for all languages, even aliens.

The first episode takes Warp 5 out of 5!

The opening is very reminiscent of the Cosmos miniseries with Neil DeGrasse Tyson, especially because Cosmos has the same person as the Star Trek production.

Still at the opening, we have no “narrated” narrative, but the images are more than expository in what will be the first season. Older fans of Star Trek: The Next Generation are sure to realize that.

As said in interviews, Picard is within the post-JJ Abrams universe, which was not bad and even better. The events of the feature were infinitely better worked on in a single episode of almost 60 minutes, than the space madness of Nero and co in almost 120.

The Signifier is one of those games that delves so much into the protagonist's mind that he becomes so absurd for ...
read more
Reviews

Assassin's Creed: Valhalla finally arrives on consoles and PC. The version we played, provided by Ubisoft, was for computers. Right from the start, ...
read more
Women rights

Many women have revealed stories of abuse involving gamers, influencers, entrepreneurs and other personalities in the gaming and electronic sports industry.
read more