Thunder Tips: 'How not to forget this girl'

What Chuck and Gilmore Girls have in common? If you answered "everything", you are right. Of course, the premises are different, but something in common unites these two highly successful series: both have finished their respective exhibitions, the story is captivating and the two series are good and of an absurd quality. Right. And if you suddenly took something from both series and could mix it up, what could it be? If you answered or thought about the movie How not to forget this girl (Remember Sunday), congratulations! You are a great observer!

The 2013 film tells the story of Molly (Alexis Bledel), a lonely waitress who shares the apartment with her best friend, Jolene (Valerie Azlynn). One fine day, Gus (Zachary Levi), the jewelry store salesman, decides to have a coffee where Molly works and at first, there is an enchantment of both. As the days go by, they get involved. But there is an obstacle to the relationship: Gus suffers from a recent memory loss problem, which prevents him from remembering her and everything around him. 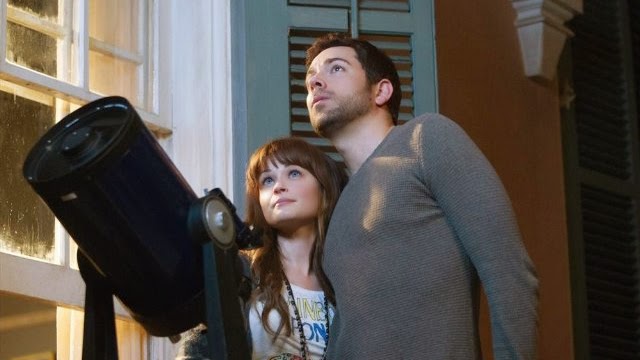 To get used to it, every morning he reads a kind of dossier about his past life. Her sister, Lucy (Merritt Wever), creates an interesting system for Gus - a pen / recorder / pendrive - where the boy dumps all the daily events, which are transformed into texts and goes to a kind of database. With creativity and playfulness, Molly and Gus will try to make love triumph in the midst of some difficulties and will prove that it is possible to fall in love with the same person every day.

The soundtrack, composed by Christopher Lennertz, is a separate show. Has Dancing Queen, from ABBA; a very cute indie style called Lost and Found, by Katie Herzig and the beautiful “Blue Sky”, which unfortunately I couldn't find a link to the video or the name of the singer. The film was produced by the Hallmark Channel - today affiliated with NBC (in the USA) and Studio Universal (Brazil).

Thunder loves to create emotional bonds and How not to forget this girl reminded us of other films with the same theme. We have the funniest romantic comedy As if it were the first time (50 First Dates), with Adam Sandler and Drew Barrimore; the romantic drama - and to cry - Forever (The Vow), with Channing Tatum and Rachel McAdams (the eternal Regina George, from Mean Girls) - this was based on the eponymous book, which tells the real story of the couple Kim and Krickitt Carpenter - and last but not least, Looking for Nemo (Finding Nemo) and Looking for Dory (Finding Dory), who in a light, colorful and playful way, reports the “recent memory loss” of the little blue fish.

Ah, How not to forget this girl is available in the Netflix. You won't lose, right? It's a beautiful way to watch that little movie for two with popcorn and tears - the ending is so beautiful! If you have already watched, write here in the comments what you think of the film, the performance of the main actors, if you have already watched the films that we cite as a reference for the theme ... if not, watch, be emotional and fall in love.

Last Monday (30), during the TCA (Television Critics Association, in Portuguese), in the United States, the vice president of ...
read more
News

Netflix considers the possibility of a new season for Gilmore Girls

Last November, fans of one of the most beloved series of all time, returned for noooooossa joy! And if you didn't watch ...
read more
Thunder Tips

Still in the mood for the launch of the live action Beauty and the Beast, with Emma Watson, today's Thunder Tips brings a reinterpretation ...
read more