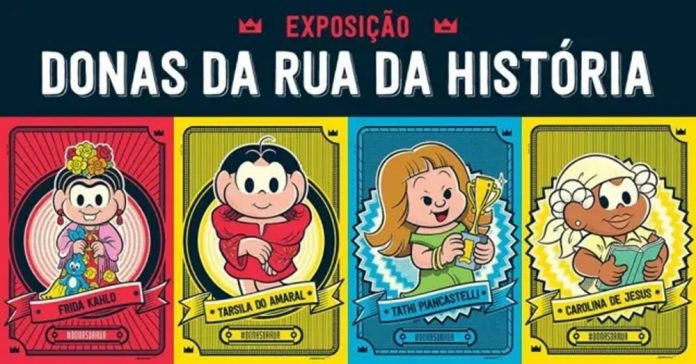 The characters of Monica's Gang invade the Conjunto Nacional for the third time to show that Dona da Rua is also in one of the most iconic buildings in the capital of São Paulo! The exhibition Donas da Rua da História honors 19 women who marked humanity with their revolutionary actions.

The show celebrates the fourth year of the Donas da Rua project, created to promote the empowerment of girls, and comes in a new format, organized around the three pillars that support the initiative, arts, sports and science, showing examples of women who stood out in each area. The Donas da Rua project has the institutional support of UN Women, a partnership that made MSP a signatory to the UN Women Empowerment Principles.

The Ladies of Rua da História they are represented by the characters of Bairro do Limoeiro, and the illustrations will be on large panels. Visitors will also be able to learn a little more about the biography of each honoree, including the biologist Neiva Guedes, who contributed to the preservation of the blue macaw in the Pantanal, portrayed by the character Rosinha, and the mathematician Katherine Johnson, whose calculations were fundamental for the man to reach the Moon, represented by Milena.

For the first time, the exhibition features the design of a duo, that of Olympic champions Martine Grael and Kahena Kunze, represented by the characters Denise and Aninha, reinforcing the importance of collaboration between women.

In addition to the pieces, those who visit the exhibition may feel like the next Dona da Rua with the right to a throne worthy of a queen and everything! The setting of the exhibition will feature the famous throne lined with “Samson” that will be made available for super instagramable photos.

For Mônica Sousa, creator of the Donas da Rua project and executive director of Mauricio de Sousa Produções, recognizing and highlighting great female names to serve as inspiration is a step towards empowerment. “By highlighting strong women, the girls are inspired to also make their own story. We want to raise the awareness that everyone is capable of making a difference! ”, Points out the executive.

The exhibition is free and will be open to the public until March 17th.

Until November 2, the show will continue at Fradique Coutinho and Campo Belo stations. From November 3 to 30, it is the turn of the Higienópolis-Mackenzie and Moema stations. And São Paulo-Morumbi and Brooklin stations are the last to receive the exhibition, from December 1st to 17th.
read more
News

During the panel by Maurício de Sousa Produções at CCXP, a live-action series by Jeremias, a character from Turma da Mônica, was announced.
read more
News