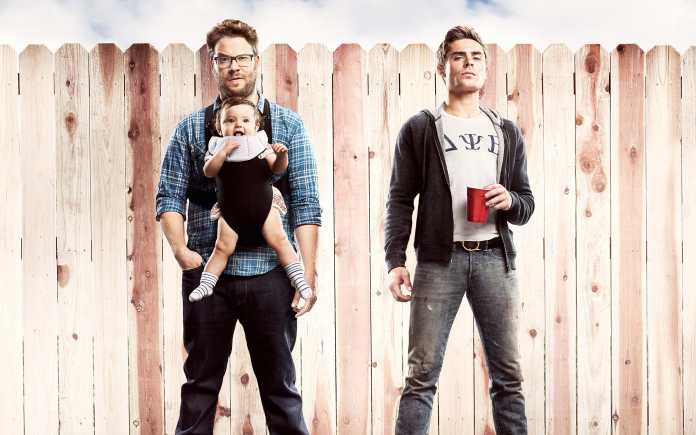 Whenever Seth Rogen launches a new comedy, opinions about the film are so faithfully divided that it is funny. The comical way that Rogen adopts to address common problems is not always well accepted, causing the audience to be divided between "fans of comedies and usual actors" versus "fans of dramas who do not like to see problems presented comically".

Neighbors (Neighbors) did not deviate from that pattern. The feature exposes the problem that most couples face, having a child and falling into monotony, however, in an exclusively comical way.

Mac (Rogen) and Kelly (Rose Byrne) recently had a daughter and are afraid of falling into the famous wedding routine. When the neighboring house is rented by a fraternity, headed by Ted (Zac Efron), the couple soon worries about the noise, but quickly begins to have fun with the new neighbors. With the friendship formed, Ted just asks them never to call the police in case they overdo the noise, just complain directly to him and everything will be resolved. It is clear that the fraternity already extrapolates in the noise the very next day, and with Ted unreachable, the couple ending up calling the police and that revolts Ted, who now does everything to get revenge.

Then a pseudo battle begins, where several pranks are played, oscillating between funny moments and some forced ones. As is usually the case with Seth Rogen's productions, there are an enormous amount of references that are the real highlight of the comedy. With a long history of comedies, Rogen gains a certain amount of freedom to put lower jokes and even mentions of personalities without suffering consequences and this becomes acceptable for those who follow his work for a while.

However, the script is not just a combination of several jokes, it has a well-founded basis and an interesting message. Dealing with maturity and reporting a very typical situation, so common, that it ends up being extremely justified. Except for a few moments where there is an attempt to put a drama not so convincing, since they try to affect a relationship so well founded that it ends up not convincing.

With many references, Zac Efron constantly shirtless and well-reported issues, Neighbors it's a fun movie without being empty. It will certainly have its share of negative criticism, but those who manage to just have fun and understand the message behind all these jokes, will undoubtedly like this production very much.

See the technical data and complete list of Neighbors

Criticism | Never Have I Ever - Season 1

TOP 5 | The 5 most exciting episodes of Friends